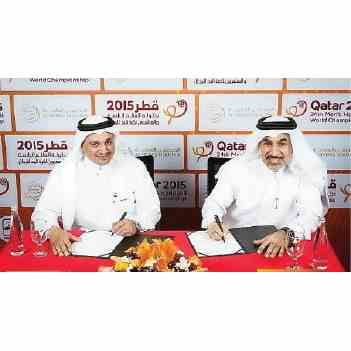 A Qatar-based multinational business, Al Siddiqi Holding will support the Championship with official uniforms and traditional Qatari attire such as thobes, abayas and shaylas for the team-members and volunteers.

“We have reached this partnership with the support of Dr. Thani Abdulrahman Al Kuwari, Director General, Qatar 2015 and are pleased to be working with Al Siddiqi Holdings, a company that has such a strong presence in the State of Qatar.”

“We are proud to be a partner of the 24th Men’s Handball World Championship and aim to contribute to Qatar’s 2030 national vision by supporting its efforts to host sporting mega-events,” he said.

“Supporting such an amazing event, where players will be giving their best to succeed, is the perfect illustration of our vision – ‘Believe, Achieve, and Succeed,” he added.

The Qatar 2015 Organising Committee is working with a number of leading Qatari businesses as part of its efforts to ensure a lasting legacy from hosting the Championship.

As well as promoting national brands to an international audience, the Committee is also instituting best practice in partnership with local organisations that can be tapped for future global events held in Qatar.